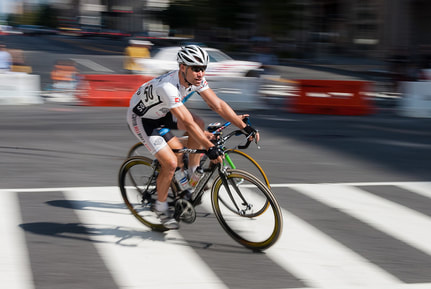 ​– Bookseller Chuck Robinson, founder and former co-owner of Village Books and Paper Dreams in Bellingham and Lynden, Wash., climbs back on his bike Sept. 1 to resume a cross-country ride to raise awareness and funds for three foundations. Robinson initially started the journey in 2015 from Bellingham, intending to pedal 2,400 miles to his hometown of Galva, Ill.  Unfortunately, the ride – which garnered nearly $30,000 in pledges to three beneficiaries – ended prematurely in North Dakota, following a crash with attacking dogs. Robinson will resume his fundraising ride at the site of his 2015 accident – he’ll say hello to those dogs first – and end Oct. 12 in Bar Harbor, Maine, a distance of about 2,000 miles.

Once again, Robinson is pledging $1 per mile to three organizations: The Book Industry Charitable Foundation (Binc), the Whatcom Community Foundation (Robinson is a board member.), and the Whatcom Community College Foundation (Robinson was a college trustee for 10 years.).
Throughout the ride, Robinson will be supported by his wife and former Village Books and Paper Dreams co-owner Dee Robinson in their Rialta motorhome. Binc’s board president Lori Tucker-Sullivan, Richard Hunt of AdventureKEEN, Matt Baldacci of Shelf Awareness, and college friend Joe Ziemba will join Robinson for portions of the ride.

Robinson, who is also a former president of the American Booksellers Association, is encouraging booksellers and other industry colleagues to pledge as well, especially to Binc. Anyone can pledge or inquire about joining the ride via the Village Books web site, villagebooks.com. Follow the links to Robinson’s blog, which includes an itinerary and daily posts.

“As a sustaining contributor to the Binc Foundation, I'm thrilled that I'm further able to support the organization on my ride,” Robinson said. “Binc has been instrumental in helping booksellers who have suffered hardships or emergencies, and in providing scholarships for higher education. It's a great foundation – and a way for booksellers and friends to help booksellers."

“The Binc Foundation was thrilled when Chuck told us he would resume his 2015 ride – not only because of his generosity to us, but because he embodies the best qualities of booksellers in our industry – the vision to spread great ideas and create strong community bonds and the determination to pursue a dream despite the obstacles,” said Pamela French, Binc’s executive director. “We truly appreciate Chuck’s dedicated support in spreading the word about our programs.”

Though the route was not designed as a busman’s holiday, Chuck has never passed a bookstore without stopping, and, on the ride, he expects to add quite a few more to the hundreds he's visited over the years. This includes a stop at Stirling Books and Brew in Albion, Mich., to meet co-owners Staci Stuart and Jim Stuart. A Binc grant helped the Stuarts cover medical costs following an accident at the bookstore that left Staci paralyzed.

Here are some ways to support Chuck’s ride and Binc:
About Chuck Robinson and Village Books: Chuck Robinson founded Village Books and Paper Dreams with his wife Dee Robinson in 1980 in the historic Fairhaven district of Bellingham, Wash. The independent bookstore and gift shop now has two locations: the flagship store in Fairhaven and its second location in the historic Waples Mercantile Building in Lynden, Wash. Village Books is dedicated to “building community, one book at a time.” In honor of that mission, the bookstore was named Washington state's Outstanding Philanthropic Small Business in 2008.  Village Books is a four-time finalist for Publishers Weekly Bookstore of the Year. The Robinsons sold the bookstore in 2017 to former senior managers Paul Hanson, Kelly Evert and Sarah Hutton. Chuck is also the author of a memoir about his life as a bookseller and how the store he and Dee built impacted the community: It Takes a Village Books: 35 Years of Building Community, One Book at a Time. Robinson is now president and CEO of Chuck Robinson and Associates, a consulting firm for retail and non-profit clients.